Visualizing a Standard: The Story of the Wolf Logo

The designer who gave Maark its wolf and shield explains how he approached the daunting task of telling our entire story in a single image.
Words by Brian Weaver, Creative Director
May 4th, 2022
Share

It was early 2018. We had just moved into the new office in Boston and rumors of a rebrand were already in the works. Alex Carr, VP of Creative, called me down one morning to the office of Mike Colombo, our CEO, to look at some initial ideas that they were tossing around. I descended the stairs into the lower level and walked into the carpeted basement that was serving as a meeting space, a ping-pong room, and as a joint office for Mike and Jason Ocker, VP of Strategy. Tacked to the back wall were dozens of printed sheets with various type treatments and simple shield symbols. Mike, Jason, and Alex were eyeing the sheets pensively and generally agreeing that everything was too generic. I remember Mike saying that he wanted this to be art, not just a symbol, and that he wanted it to represent our name in a unique way. At that point, someone mentioned the idea of heraldry. Historically, heraldry has been expressed by means of flags or standards that armies, clans, and in more modern times, fans, have all rallied around. And since Maark means standard it seemed like a logical connection. We needed an image that we as an organization could all rally around.

Alex and I went back upstairs to my desk and I sat down. He put his hand on my shoulder, paused for a moment, and said, “Start looking into heraldic symbols.”

I would have loved to have done my research by going to the Boston Public Library and poring over medieval manuscripts by lamplight. Instead, I turned my chair around to face my computer and started googling heraldic symbols. The list of heraldic symbols is quite long, and some were obvious no-gos. Grenades? Uh, no. Pretty sure we didn’t want a bomb in our logo. Man-tiger? The body of a heraldic tiger and the head of an old man. I don’t even remember what that was supposed to represent, but it was one of the weirder ones. I kept looking. Falcons…hmm. They’re fast. They’re focused. And in heraldry they mean someone who takes action. Looked like a perfect match. I started sketching. 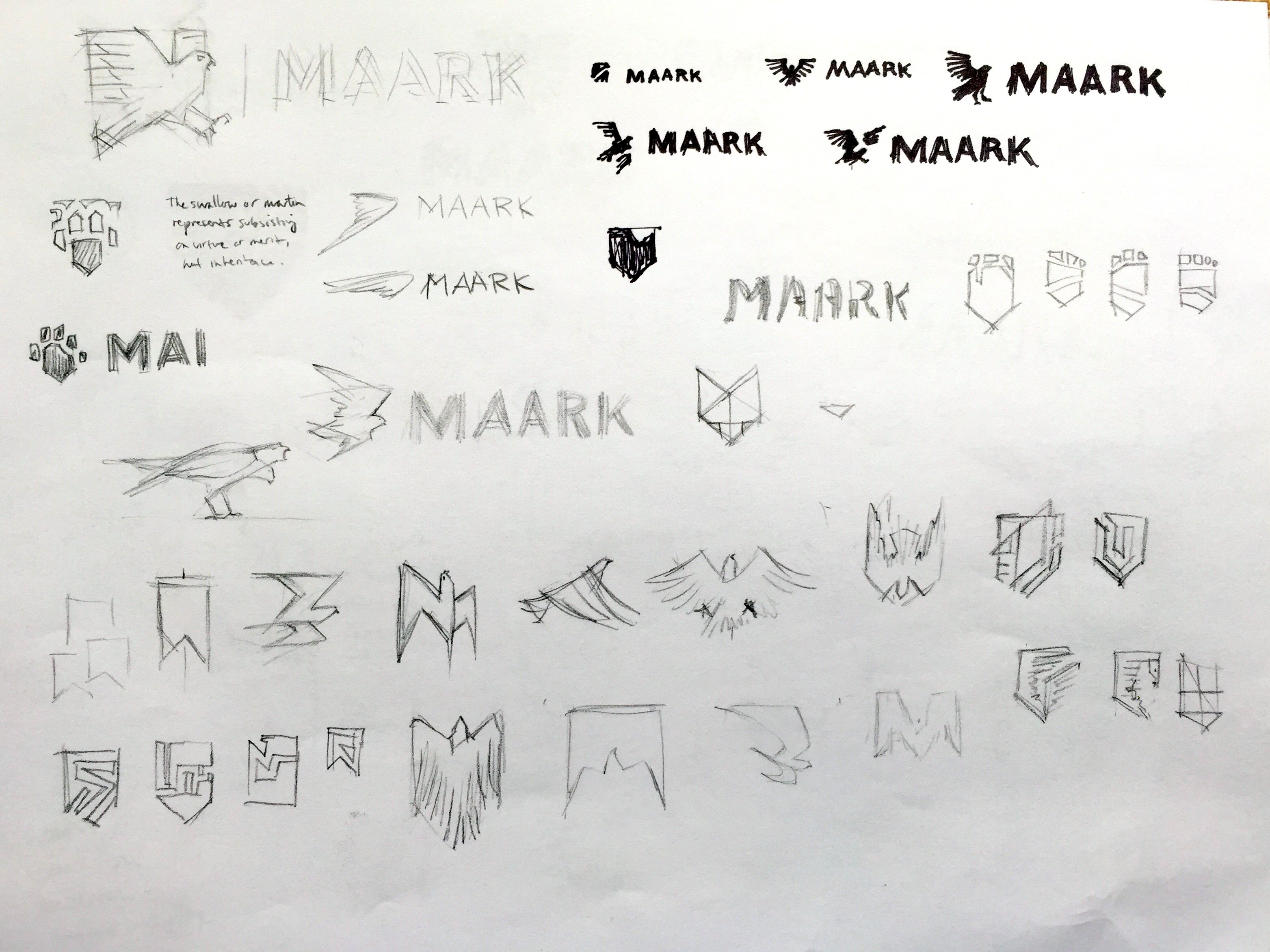 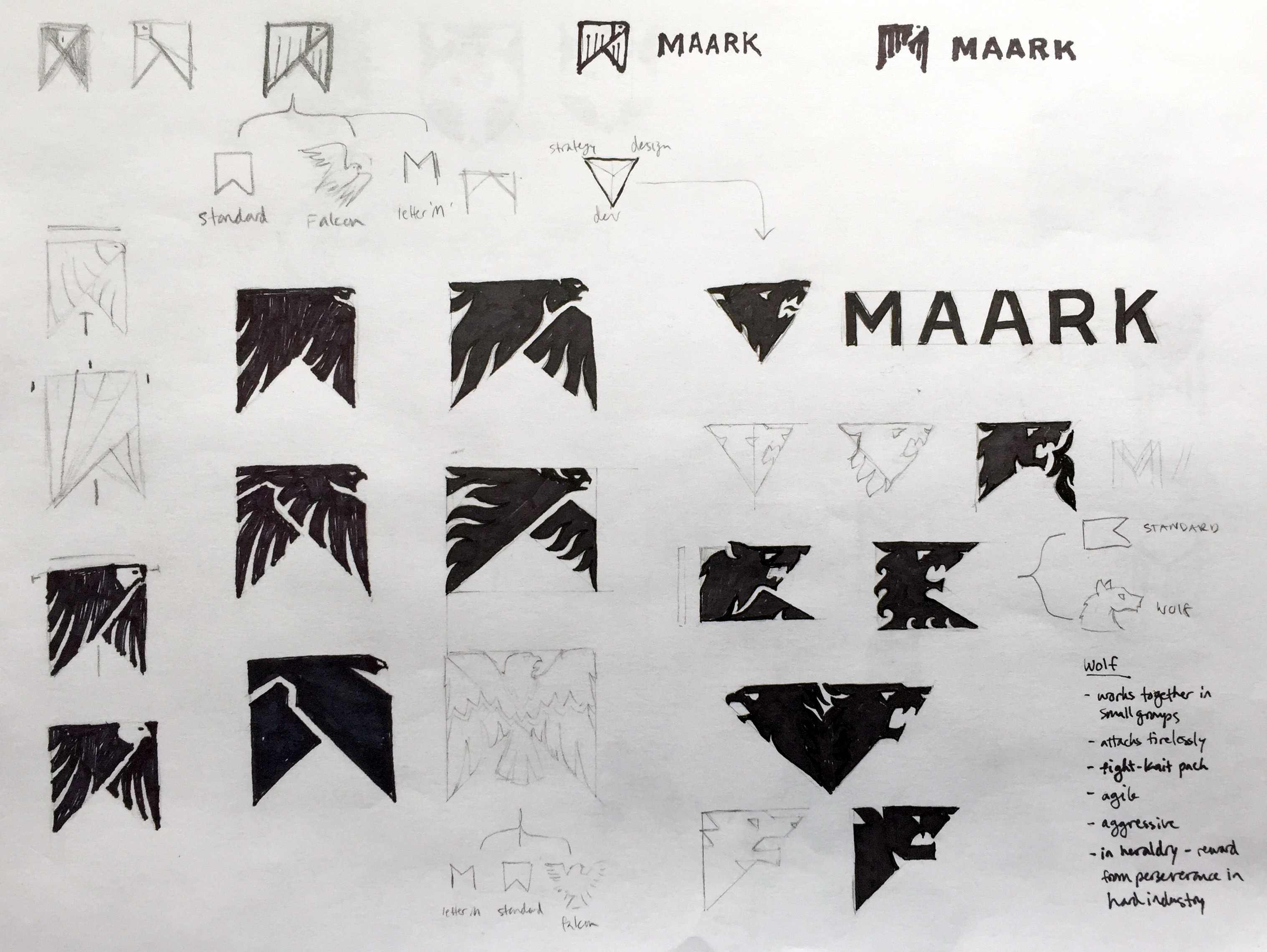 Falcons flying, falcons diving, falcons with wings outstretched, falcons on shields, falcons in the shape of shields. After several days of sketching out ideas, we met back in the basement office. Feedback from Mike, Jason, and Alex was that the falcon felt too individualistic. Even though it possessed some admirable qualities, it didn’t accurately reflect the team culture of Maark. Also, some of the falcons were looking too militaristic and we wanted to avoid that association. I went back to my computer to look for more ideas.

I don’t know if it’s because W is near the end of these alphabetic lists of heraldic symbols or because wolves are traditionally portrayed as villains in fairy tales and in popular culture, but I didn’t think of wolves as a potential option at the beginning. When I arrived at ‘wolf’ I started reading about its heraldic meaning. “Reward for perseverance in hard industry.” Seemed like an apt description, and in real life, the wolf is agile, tireless, and works together with its pack.

There were still a lot of unanswered questions. What should it look like? How many wolves should be included in the logo? Should it be representational or more abstract? I began to sketch quickly in pencil to get ideas down. I find that pencil is ok for ideation, but black markers are best for figuring out the positive/negative shapes of a logo. I used a combination of a Sharpie, a Pentel brush marker, and various Micron pens. A fairly good representation of a logo can be achieved with those tools and a much quicker result can be established with them than with a pencil.

In my early iterations, I tried to incorporate both the falcon and the wolf–the falcon for its individualism, the wolf for its teamwork–but after a while I realized that the wolf embodied both qualities, so I abandoned that idea and went 100% on wolves. 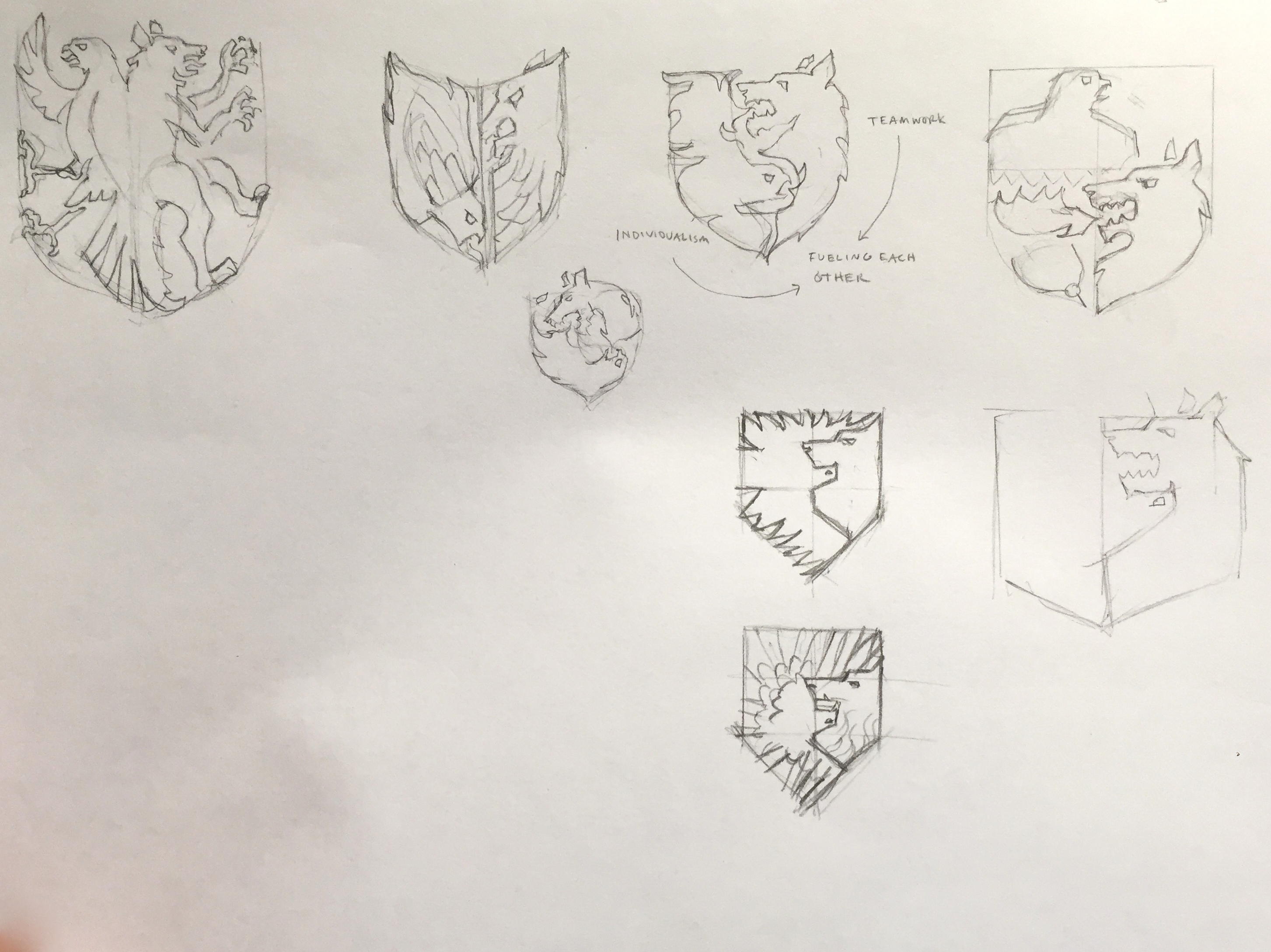 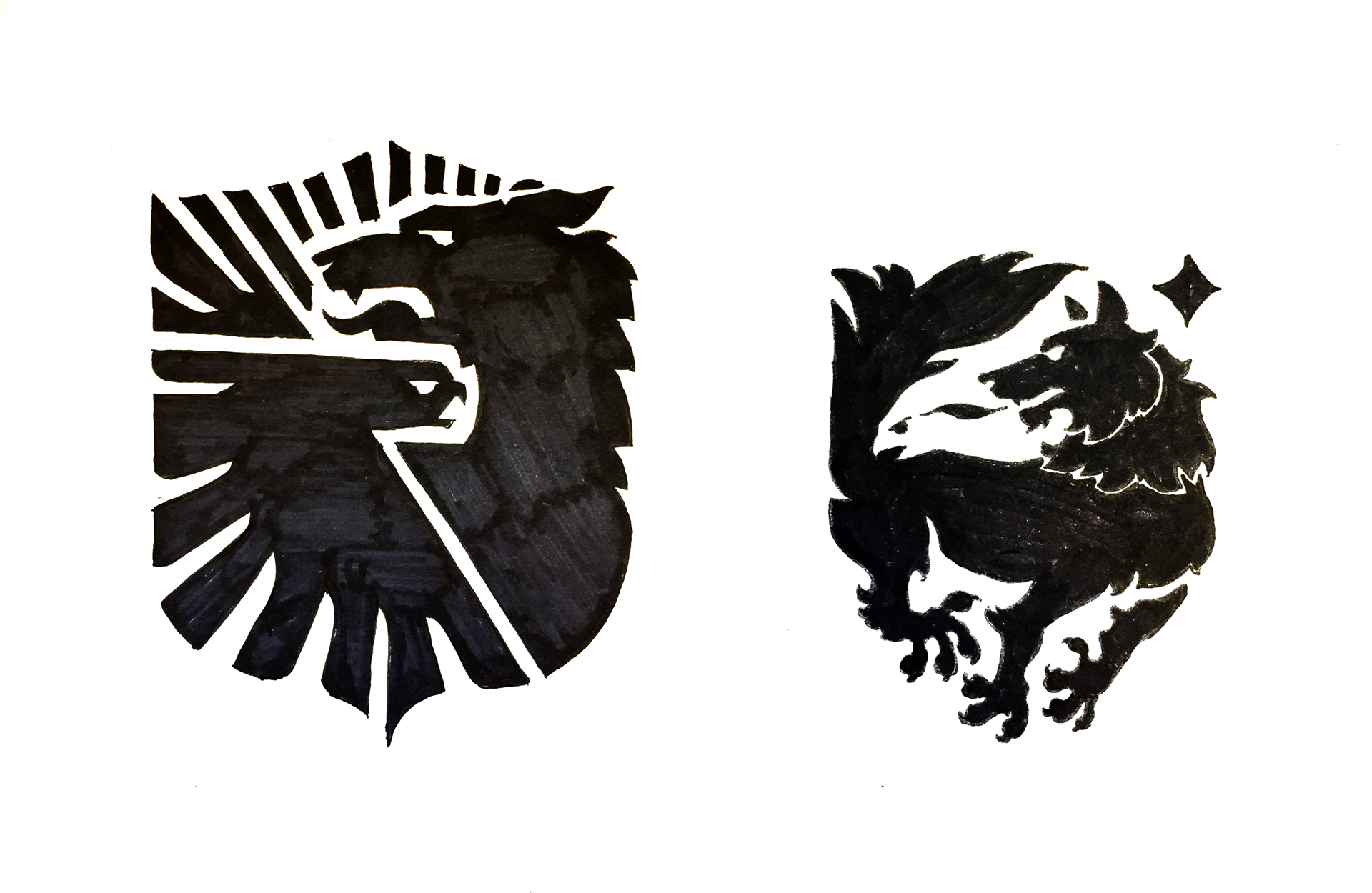 I drew literally over a hundred wolves. If you’ve ever tried to draw a wolf from memory, it’s a lot harder than you might think. They end up looking at best like dogs or at worst like llamas. 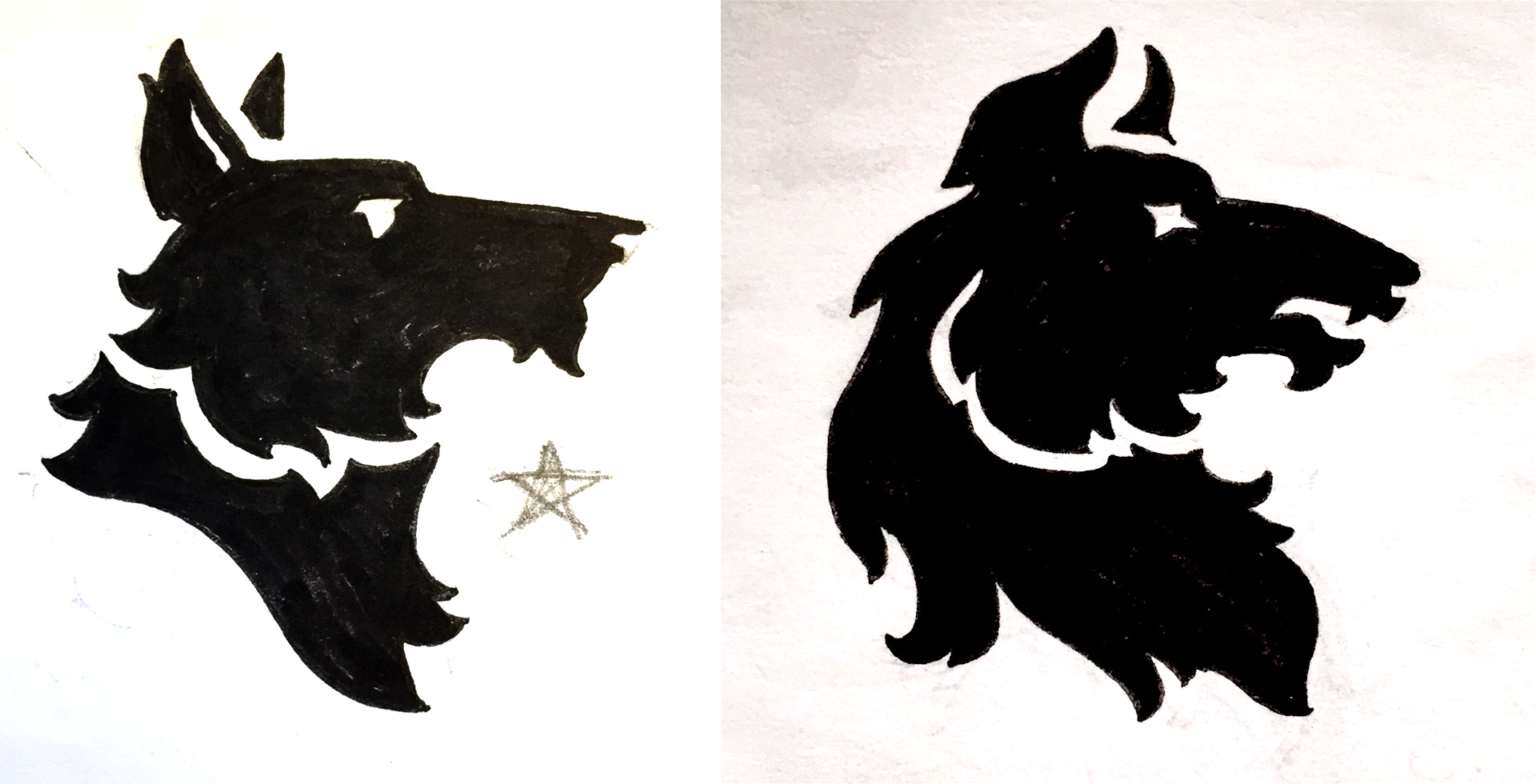 Using reference of real wolves was crucial to get the head structure correct.

Because we wanted to represent the pack in the logo, I sketched many ideas that involved two or three wolves in the logo. I tried to find ways to integrate them in a natural way. For days, maybe even for a week or two, I was stuck on the idea of defining one wolf in the negative shape between the head and the tail of the main wolf, but I just couldn’t get it to work. Finally, someone suggested we ditch the second wolf and stick with the one, which was a good call.

What is Old Becomes New

After that, there was one other piece of design feedback that really solidified the direction for me. Mike had given the example of the Ritz-Carlton logo, and how that had evolved over the years. It was an old brand, with a logo that had probably been engraved by hand. In its most recent digital iteration, that logo had been simplified and modernized. In a similar way, Mike wanted our brand to feel like an old brand that had come of age in the digital era. 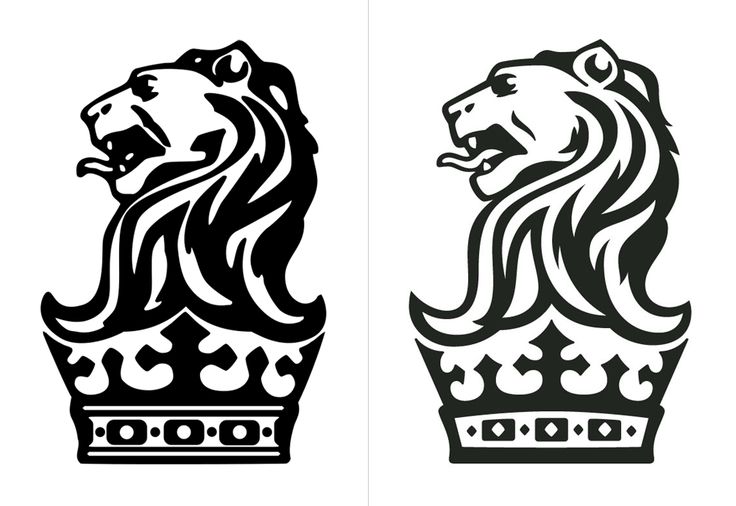 With that thought in mind, I set aside Photoshop and my Wacom, returned to my pencil and paper and quickly sketched out a version of the wolf that would end up being the foundation for the final logo. There was still a lot of work to do, but the general light and shadow pattern was worked out in this final sketch. And from there I went into Illustrator to draw the final mark. 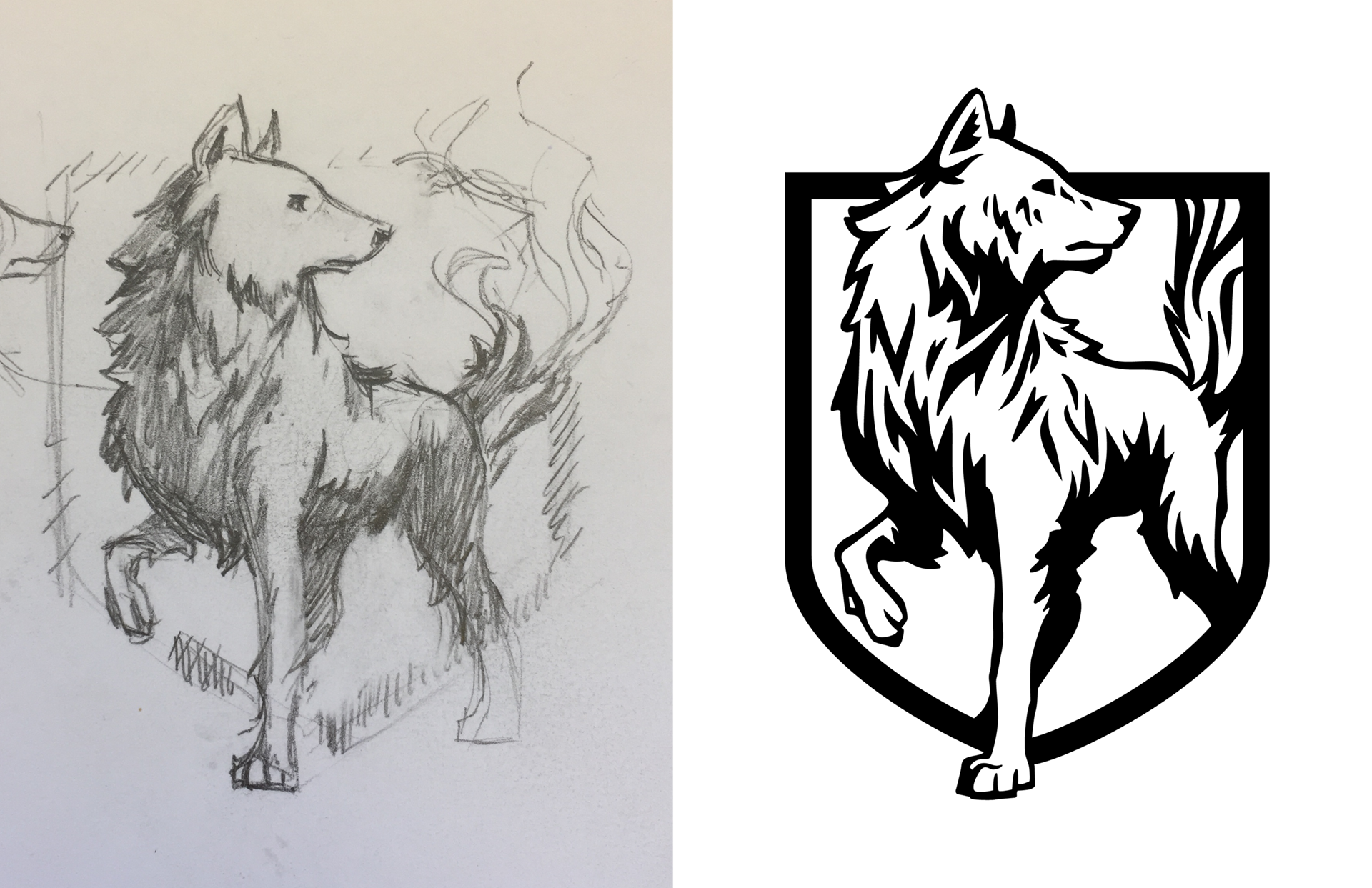 As with any logo design, we could have tweaked it for weeks on end, but finally we had to call it a day. Too many client projects had been piling up while I was drawing wolves. The wolf shield mark along with the custom type treatment by Alex Carr, was officially finished. In addition to the final logo, we created a negative version of the logo as well as a small version for applications where the full logo would be too small to read correctly. 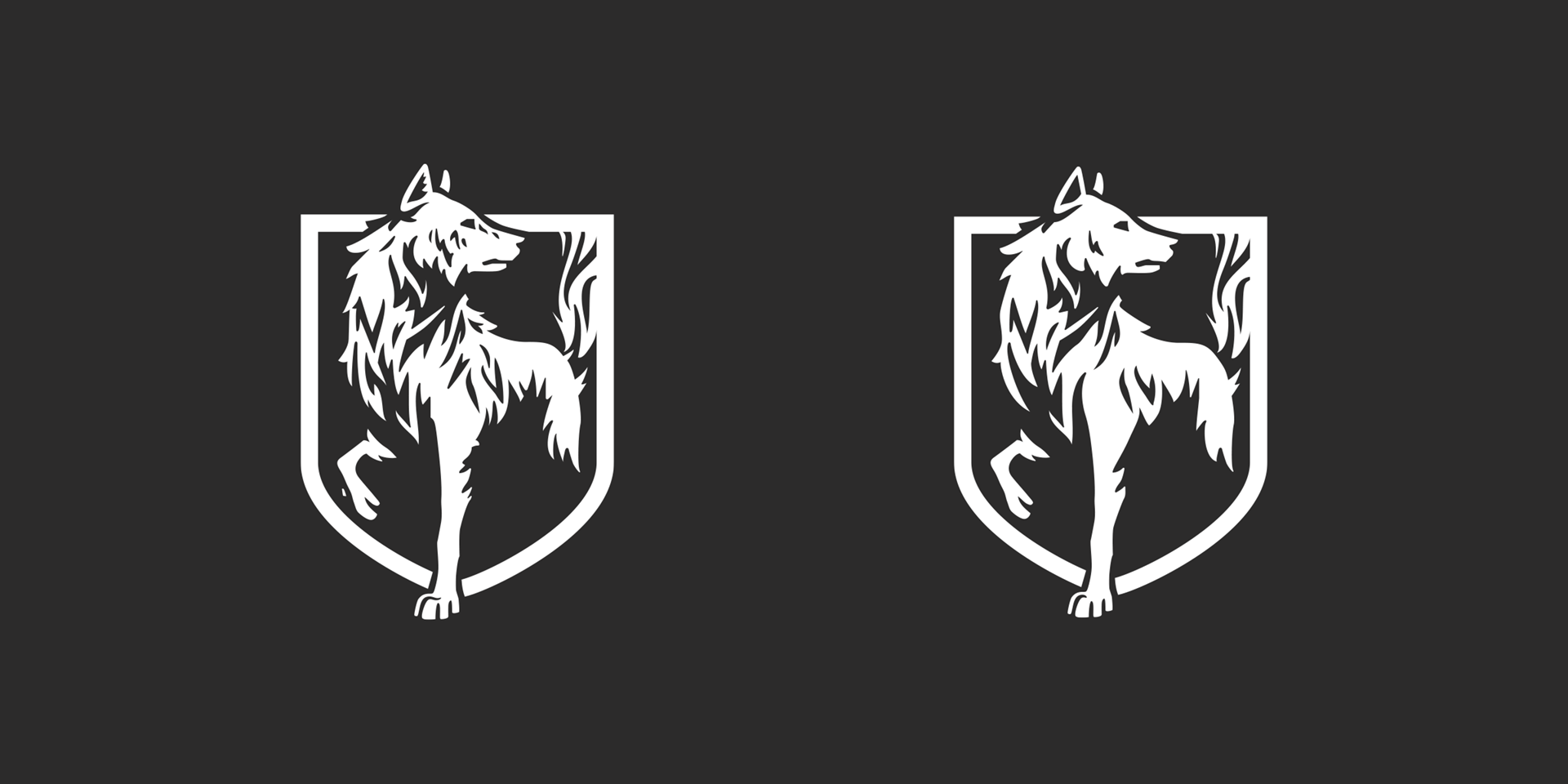 Read more about the Maark brand, including why we rebranded and the lessons we learned from it after a year in the wild.

Next Up in Design & UX