Leading Through Disruption: Weathering a Storm

Part 1 of a 4-part series by Maark CEO and Founder, Michael Colombo.

The new normal is dumb. This week our family will be taking our first-day-of-school pictures from our kitchen. They’ll feature two high school boys with bedhead and pajamas waiting for a Zoom call to start. Homecoming is giving way to homeschooling. Traditions be damned, even the ones that are supposed to save us from damnation. Trick-or-treating. Apple-picking. Corn mazes. It all feels so annoyingly perilous.

Throughout the course of the year I’ve thought a lot about what it means to confront peril. What does it actually take to “weather a storm” and lead through disruption? Is it a passive act of hiding below deck, hoping to emerge to blue skies and safe waters? Or is it more like a fight for your life? Billy Tyne and his crew in The Perfect Storm.

We ask our clients to lead through disruption every day. It’s the MO of the agency. We bring disruptive ideas, technologies, and processes into their business, and we ask them to maintain the focus of their teams and stakeholders on a sometimes far-off goal. We take for granted that they’ll actively lead.

The reality is they often don’t. They’re often waiting below deck, hoping to emerge to a bright new business. If projects fail, or they’re wildly delayed, leaders point their fingers in ritualistic cowardice and self-preservation. I don’t think I’ve ever seen a business leader stand up and say, “We failed because I failed to lead.” Business leaders very rarely admit failure at all, let alone their role in it.

When confronted with disruption, the “below-deck” response is to revert to caricature. Leaders become ill-informed cheerleaders, offering empty platitudes as evidence of impending success. Scripted and costumed in make-believe optimism, they take the stage at corporate pep rallies, armed to the teeth with sports metaphors. One of which they’ll inevitably turn into a hashtag. #its4thandinchesfromthegoallineandthegameisontheline

Effective leadership requires putting on gear and climbing above deck. From inside the storm,  decisions need to be made quickly, and they need to work. The margin for error is extremely thin, bad decisions extremely obvious. Only real solutions that leadership itself is willing to help implement are of any value. They need to be fully invested. To take our maritime metaphors to an exciting new level, “all hands on deck” means everyone, regardless of their place in the hierarchy,  is working together to confront an immediate crisis.

Confronting crisis, though, requires vision. Not the five-year kind, either, although that will become important again. Before planning for the future, though, leaders need to think more practically about the present. They need to focus on something tangible, real, measurable. Something that can be achieved quickly. In the next six months. Or sooner. Something that will change things dramatically. Leading through disruption means thinking hard about the next goal and putting everything you’ve got behind its success.

Everything you’ve got, though, needs to be more than meetings. It needs to involve the real work of change: ideas, essays, sketches, presentations, architectures. These bring change. Creative problem-solving and risk mitigation bring change, because they require hard skills relevant to real solutions. Daedalus helped Icarus escape the minotaur by making him wings. Figureheads don’t make wings. They don’t even think of them. Doers make wings.

Of course, the real bravery comes in flying with them. And finding that bravery might be the hardest part of leadership. Big companies foster fear. Fear of accountability. Fear of ostracization. Fear of failure. No one wants to be Icarus. Without a clear vision and hard skills, standing out in a corporate crowd brings its own personal peril.

The bravery needed to lead is actively earned through preparation. It’s earned through developing the right kind of vision, practicing the hard skills to communicate it, and building the relationships required to execute. We’ll explore each of these further in subsequent posts. For now though, it’s enough to think about how to weather the storm when merely waiting it out is not enough. It’s a difficult undertaking, especially at a time when bedhead and Zoom are the new normal. How do you keep everyone moving together? Surrounded by so much disruption, you need a single story that translates in any context. You need a vision. It starts there.

Continue to Part 2: Finding Your Bearings 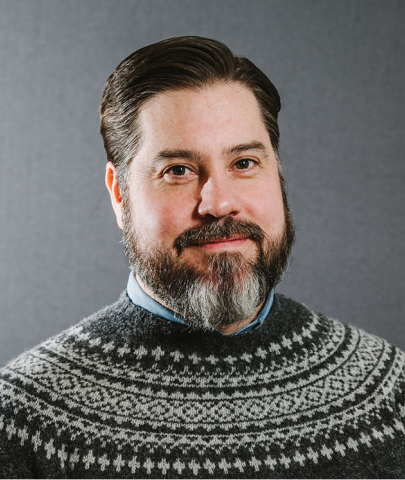 Mike is the founder of Maark and has served as the agency’s strategic, creative and technology lead in programs ranging from complete digital transformation of Fortune 500 clients, end-to-end relaunch of category-leading brands, and strategy, design and development of new digital products.
Popular Topics
PersonnelTrendsStrategyAdvertisingDesign
Technology
Top Tags
ciodigital