It’s Time to Kill the Launch Metaphor for Websites

Last week I spent countless hours trying to get my parents scheduled for a COVID-19 vaccine in Massachusetts. I began the odyssey on Mass.gov before being shuffled to an app sitting at vaxfinder.mass.gov. It was offline for the entire morning, but by the afternoon it was running at its full potential. This application was designed, apparently, to provide the elderly residents of Massachusetts an inaccurate list of destinations where they may stumble into an appointment for a potentially life-saving injection. The rise of hope swallowed whole by the menace of software. 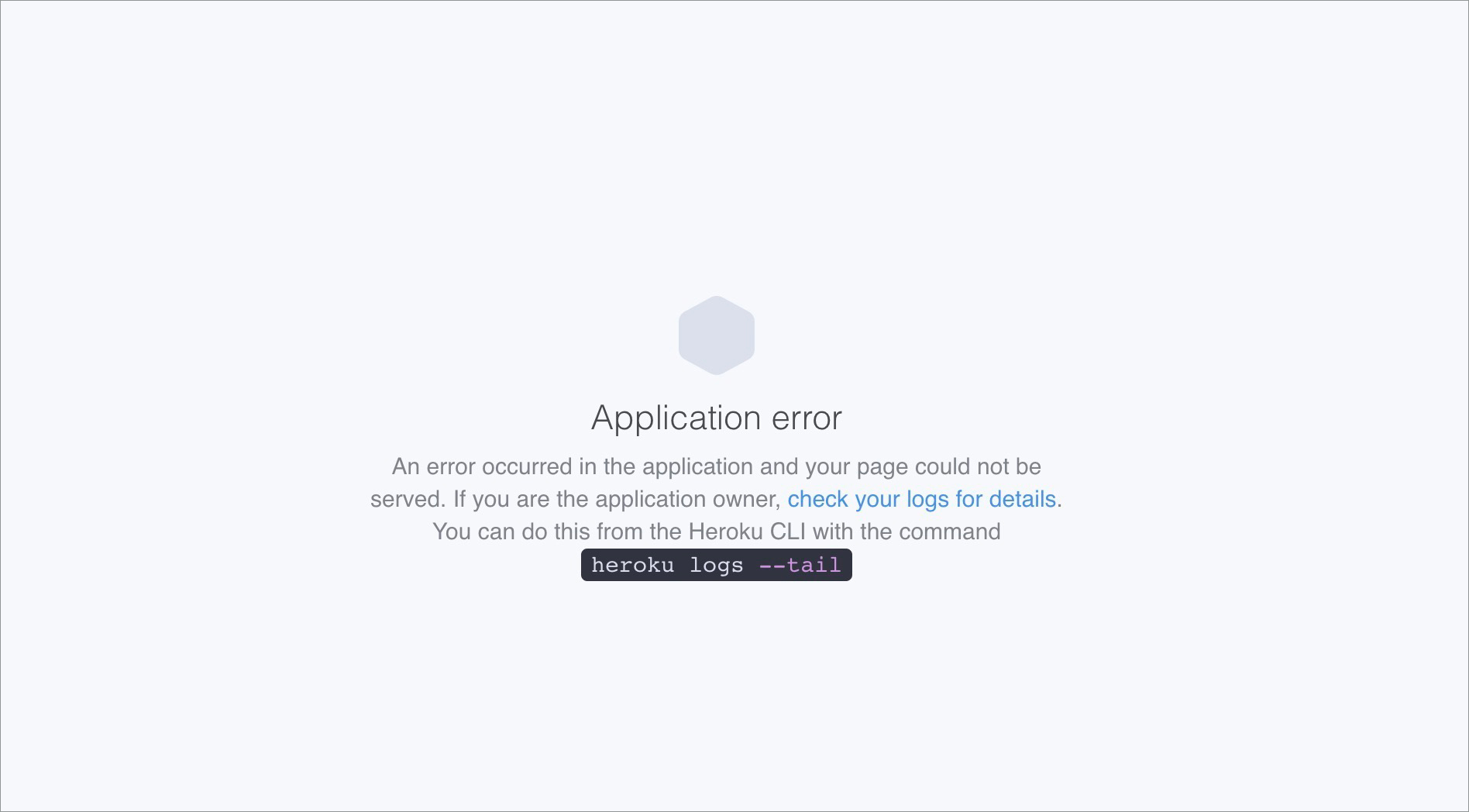 The list consists of both private and publicly run vaccination sites like CVS, Greenfield Senior Center, "Former Circuit City," and the Doubletree Hotel. About a dozen pages long and containing every CVS from my parent's house to the sun, the list was inevitably infuriating. Each entry in the list links to another website. CVS links to the CVS website, the senior center to their "website," and Former Circuit City to the Wayback Machine. Each of these destinations created its own process for registering, finding, and scheduling appointments. Like an A/B/C/D/E test where every user is forced by failure through options A, B, C, D, and E in a choose-your-own-misadventure anthology of dead ends. 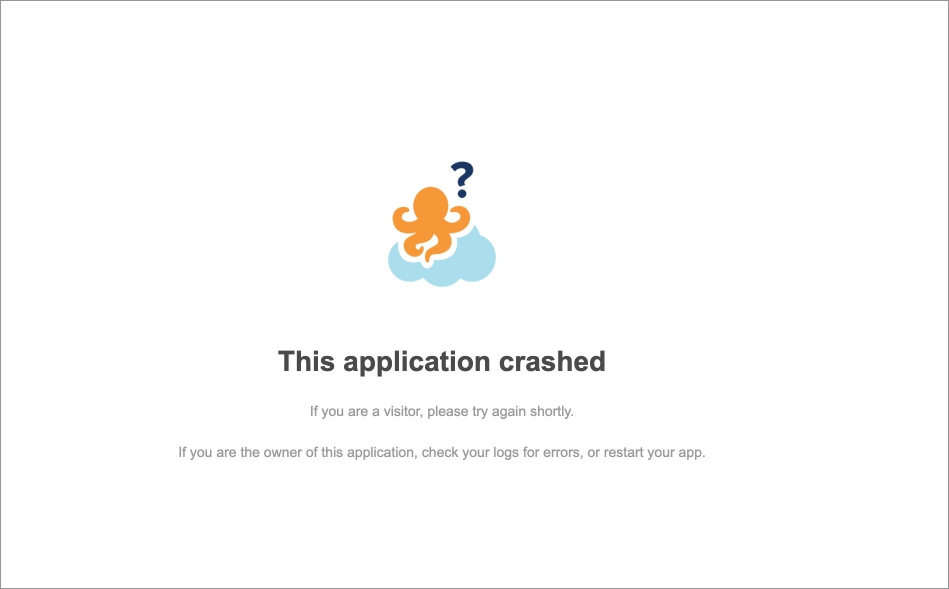 PrepMod, the state's official appointment scheduling application that was designed by the Maryland Partnership for Prevention, was itself offline during critical scheduling windows. When accessible, it was intended to give scheduling access to the largest, state-run venues such as Gillette Stadium and Fenway Park. What it actually does is provide false information and an even falser sense of hope. PrepMod (which is being used by 27 states) displays venues that are not yet open, appointments that don't exist, or takes users halfway through an eight-step scheduling process only to crash on step 2, 3, 4, or 5. These are really the four functions of PrepMod. Here, let me write the user requirements:

PrepMod came to be because the CDC spent $44 million with Deloitte to have them develop a website called VAMS that was regularly broken or offline, and eventually abandoned by all but nine states. Stop me if you've heard this story before. It calls to mind Marlow in Heart of Darkness, "Your strength is just an accident arising from the weakness of others." 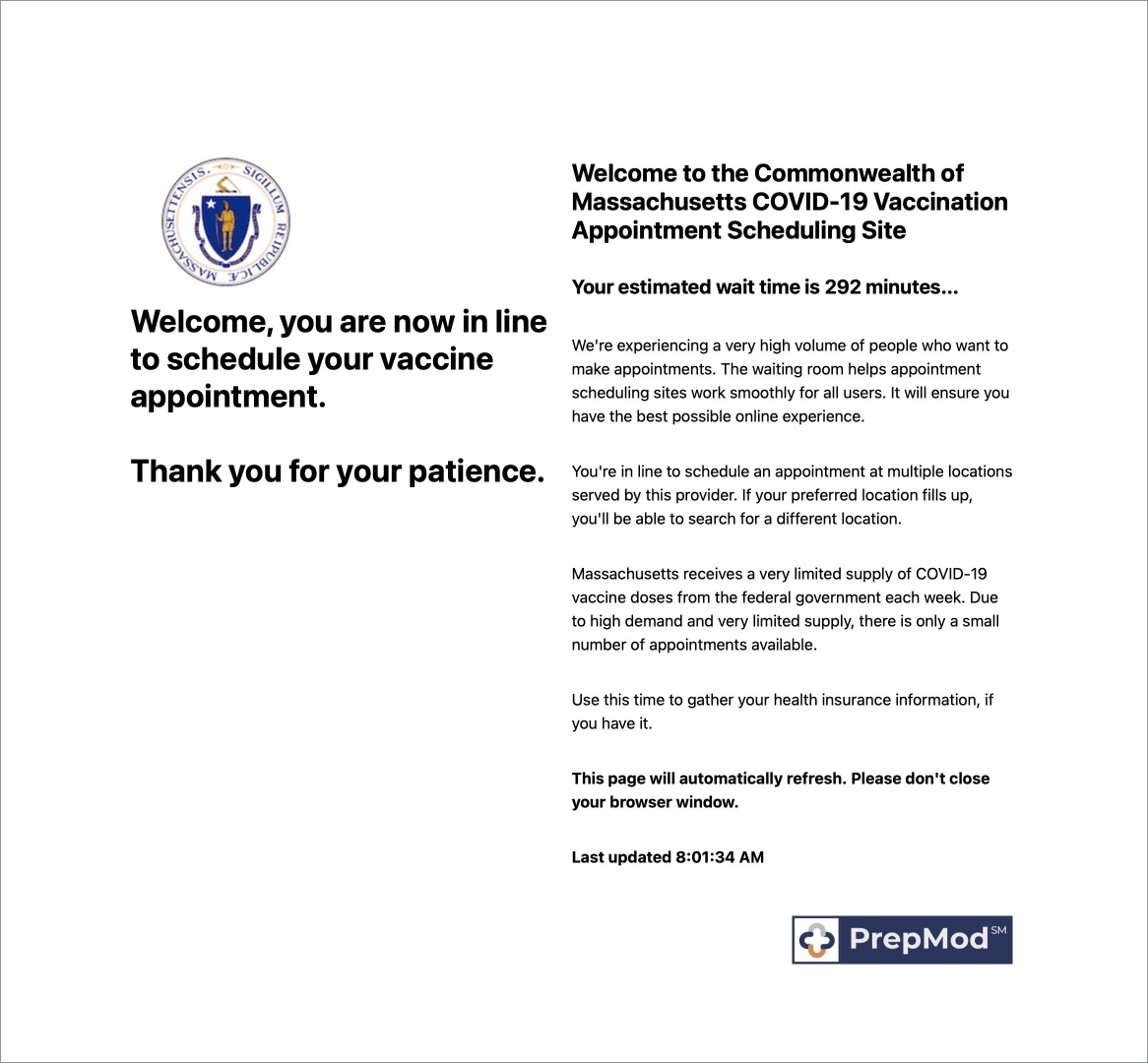 Only 292 minutes in the virtual waiting room.

So far I've been to twelve different websites, called four different contact centers, and given my parents' medical information out more than 100 times. And I'm still without an appointment. It's easy to write this experience off as the inevitable outcome of slow, bureaucratic institutions attempting to deliver digital experiences at scale. But it's not that obvious.

These systems weren't just home-grown government projects. Some were built by the largest vendors in the digital space for tens of millions of dollars. Some were built by multi-billion-dollar consumer brands like CVS and Walgreens. Some were built by innovative new startups. And all of them failed catastrophically. This is just the state of things. This is what digital delivery looks like in 2021. With a year's lead time, the government printing money, and life and death stakes, the digital industry was unable to get a list to render accurate information, a form to stay online, or a logical user experience on a single website.

It's painful to see. Particularly as the digital industry stands in such stark contrast to other industries. Ultimately COVID-19 will be seen as a milestone in scientific progress. The life sciences and pharmaceutical industries achieved what many considered impossible right up until the moment they achieved it. They brought life-saving vaccines to the public in record time, using the most cutting edge genomic science available. It's an immunological breakthrough that will be one of the few high points in the historical record of this pandemic. It's a zenith of human progress.

And yet, the digital industry could not get a form online. In the same week we landed our fifth robot on Mars (this one carefully craned down to the surface so as to not destroy the helicopter it was carrying), we also told millions of people that while vaccines are ready for use, it's websites that we've yet to solve. 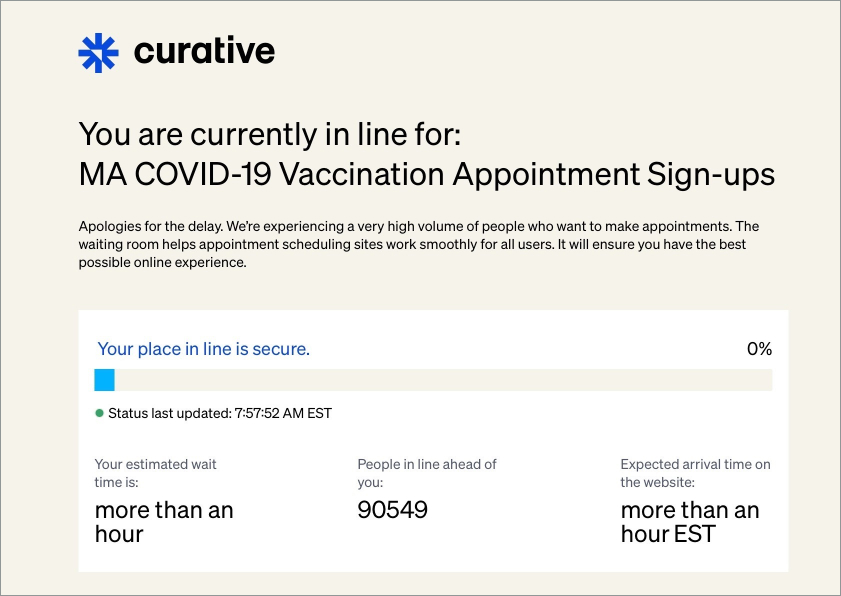 The software industry has gotten great at apology modals.

How can the industry be in such utter disarray? Is it bureaucracy? Do other industries put as many barriers between needs and outcomes as we do in digital? Is it a lack of standards? The digital industry has no universal understanding of its own terminology. For the most part, it has no idea what it means by terms like agile, requirements, MVP, UX, design, architecture, QA, security, scale, devops, etc. Each conversation is based on the last book someone read, the last place they worked, or the current culture they're delivering in. Communication suffers to Babel-ical proportions.

Is it a lack of expertise? Is the demand for design and development skills so high that the industry is full of boot-campers, coming off twelve-week online courses that they've turned into six-figure salaries? What about the non-campers? Are they as obsessed with breakthroughs as the folks at NASA or Moderna? Are we building careers based on big achievements, or is the entire industry in constant pursuit of resume fodder, chasing new tools, technologies, and methods like moths to a bonfire. 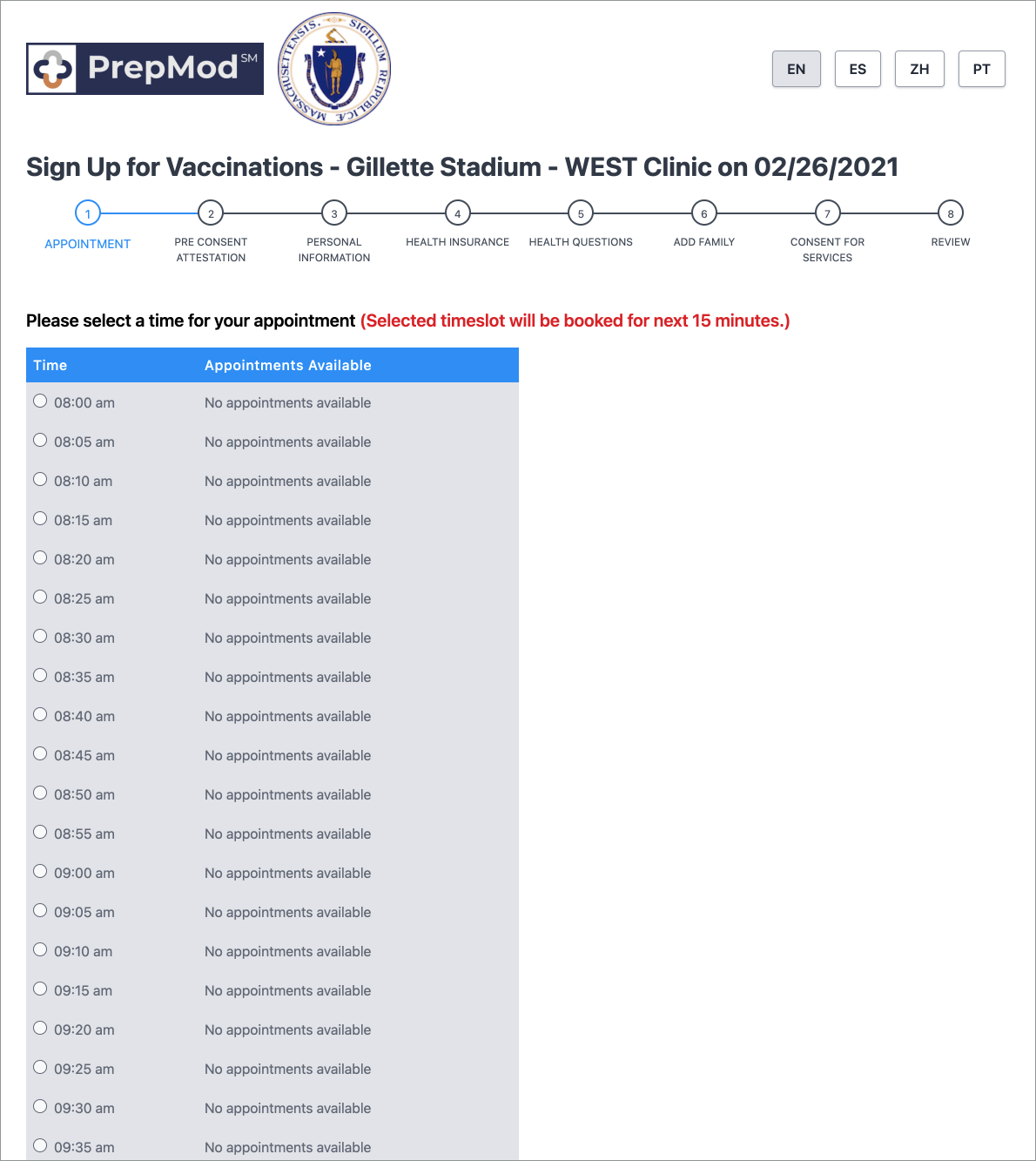 It told me appointments were available, put me in a queue, congratulated me, and then showed me this.

It seems to be all of these things and none of these things. All of these problems exist, but in themselves are not the cause of chaos. Taken together, though, they amount to an unshared definition of success. PrepMod’s builders thought they'd succeeded just by virtue of its launch. The business stakeholders, looking at twenty-seven new customers, probably called it wildly successful. Had they taken a dirty look at a user test, however, they would have seen flaws so flagrant that the whole project and everyone involved would have been immediately grounded. They're likely shocked to find out they've failed. The Perseverance rover has no such ambiguity. It has to make it to Mars and complete its mission. From Day 1, everyone involved knows what success looks like. It's unambiguous. It doesn't rely on my definition of agile or yours. It's objective. If it can't succeed, it doesn't launch.

This should be the goal of the digital industry in the years to come. We need to objectify success in digital product and service delivery in a way that is accessible to everyone right from the start. When we do that, we'll immediately realize how little we know about how to get to success and how utterly tactical our "get to launch" approach has been. We'll see how poorly some of our most treasured assumptions about delivery are serving us. We'll understand that you can't iterate on failure. Every product needs a shared and more exacting definition of success.

When to Use WordPress in the Enterprise